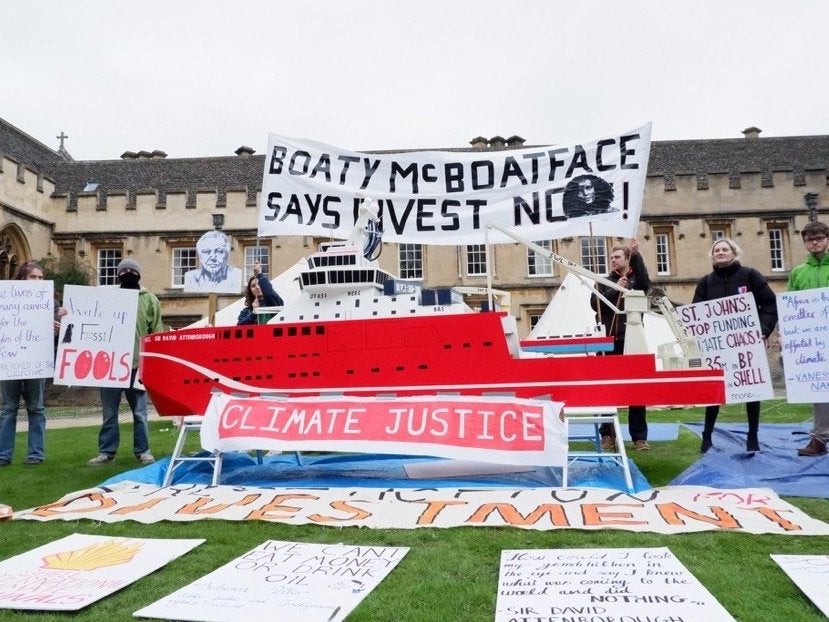 I wasn’t directly involved in this achievement, but I do personally know a lot of the key people who worked hard to make this happen, and I want to clarify a few things:

There will also be oversight to ensure it actually happens. A role will be created on the Investment Committee for oversight by someone who

The careful consideration of the wording to close common loopholes, and structurally-aware oversight measures to ensure follow-up, should hopefully mean the motion is followed as intended.

The University of Oxford has a complex financial structure, with individual “Colleges” being akin to financially-independent Halls of Residence, as well as the main university having its own finances. This announcement is that the main university has divested by instructing their investment management division to follow the changes in the motion that was passed.

This is huge because the central university is extremely rich (~£3bn is being divested), and about half the colleges allow their funds to be controlled by the central University Endowment Fund.

However, it’s not a complete victory yet, because several of the colleges have not yet divested their own endowments (most of which are tens or hundreds of millions). (It’s an example of how disproportionately powerful an institution Oxford is that most of its “poorer” colleges still have larger endowments than many entire universities.) Multiple colleges have divested over several years, but the decentralised system makes this a Kafkaesque slog for student campaigners to get them to divest one by one.

Campaigning on this has been going on for years, several colleges divested a few years ago, and this particular motion was organised and proposed (and expected to pass) last term, before the major oil price drop due to Coronavirus. Obviously it won’t have hurt that oil is now a worse investment, but it would probably have passed anyway thanks to all the activism and organising that went on.

In fact we can quantify how much money the student campaign has moved out of fossil fuels in the lead up to this announcement. This year alone Oxford pulled out of £30 million in fossil fuel investments, bringing the overall percentage of funds invested (indirectly) in fossil fuels from 1.7% to 0.6%. Over the past 10 years while the campaign has kept pressure on the endowment managers they have brought the percentage from over 7% of the 3 billion to 0.6%. That’s more than £200 million in fossil fuel divestment that had already happened before this announcement! The remaining 0.5% percent of the endowment is expected to continue to fall with these new measures, in particular because the engagement criteria is so strict.

This is all referring to money invested through multiple managed funds, none of these investments are directly into e.g. Shell. The managed funds are allocated across the economy (as is common in investing to try and spread risk), including some fraction in fossil fuels.

These subtleties mean that some universities’ “divestments” are much less complete than what Oxford has just announced, because those universities only prohibited direct investments into fossil fuels.

One of the breakthroughs for the student divestment campaign was getting some very influential Oxford academics on board pushing for divestment, both publicly and internally. The two notable ones are Myles Allen (climate physicist and lead author of the 2018 IPCC 1.5C report) and Cameron Hepburn (Environmental Economics Professor).

A small and extremely dedicated student campaign has been pushing for divestment for years, and was a key part of this. You can read the Oxford Climate Justice Campaign’s press release here.

A notable action recently was the occupation of the central quadrangle of St John’s college (who unfortunately still haven’t divested). A group (made of students but also supported by the local XR group) literally camped on the grass inside the college for a week, and even brought a big wooden boat (the RSS David Attenborough), which brought much attention and embarrassment to the college for not divesting.

Some divestment motions are basically absolutist statements of intent, which explicitly assume that fossil fuel companies cannot exist in any form in a net-zero emissions world. However some of the (carefully-worded) language in the motion is about “engaging” with fossil fuel companies. This means if a company can demonstrate serious progress towards becoming carbon-neutral then the university wouldn’t consider them to be requiring of divestment. The only (non-greenwashing) way a fossil fuel company could become net-zero in reality is through large-scale deployment geologic Carbon Capture and Storage, and this engagement clause is designed to encourage development of those technologies. The motion isn’t supposed to allow space for these companies to simply pay for lots of ineffectual tree-planting offsets, for example. It’s worth emphasising (and well-understood by the motion’s authors) that not a single fossil fuel company has a credible hard net zero target yet, let alone strategy. This topic is worth several articles in itself, but suffice to say that those two academics mentioned in particular have complex and expert views on the role of fossil fuel companies in the future and a lot of the more detailed thought on this point reflects their involvement.

While divesting £3bn is not to be sniffed at, this is possibly even more important as a signal. The mere word Oxford is an international symbol of learning and expertise, and if the University of Oxford thinks fossil fuels should be ditched, then that sends a strong signal that it’s probably about time. A lot of climate-related research happens at Oxford, and this motions helps strengthen the arguments of the academics who are crying out for the implications of their research to be acted upon. Furthermore, if Oxford University leveraging its academic expertise and industry connections leads (through “engagement”) to some fossil fuel company breaking rank and seriously developing CCS technology, the impact of that would be measured in Gigatons of CO2. These kind of downstream socio-economic impacts are harder to predict, but potentially where the real value is.